Today, we celebrated Tripp’s 3rd birthday. My wife has been out of town on business for weeks, so I put the whole thing together myself. Given my son’s current penchant for very selective eating habits, I decided to make a custom cake using some of his favorite foods.

So I baked. Which is kind of a big deal for me. I almost never bake goods, and even more rarely have I frosted and decorated said baked goods. My first intention was to try something very original. Tripp loves strawberries and bananas, so I had this idea for a banana bread iced with strawberry icing. The idea was shot down by a few experienced bakers/family members. I went with plan B.

I bought a yellow cake mix, ready-made strawberry frosting, fresh bananas, and strawberries. I prepared the mix as directed, which means I got to play with a hand mixer. Cathy suggested a cream cheese frosting, since we had some on hand. I checked a few recipes and decided a 1:1 ratio of the whole tub of frosting blended with a whole pack of cream cheese would work, but I tested a small portion first to be sure. My instincts, plus a fair share of cooking show viewings, told me icing the cake would be messy, so I laid out some wax paper and got to work. You can see the finished results below.

The cake was a big hit. I’m not 100% sure people were impressed with the cake in general, or simply that I was the baker, but either way, much was consumed. Most importantly, Tripp loved it. I don’t know how often I’ll bake in the future, or how ambitious I’ll ever try to get, but like many things I’ve tried in the kitchen, this was another effort that proved to be easier than I’d expected. Enjoy! 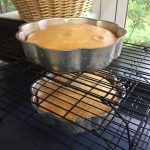 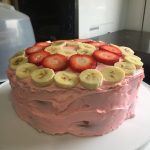 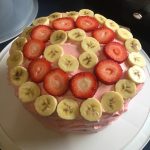 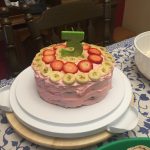